On March 4, the Council met in the Palace of Ngolo, in Bata. The Draft of the General Law on Social Security and some agreements and treaties with the neighboring Republic of Gabon were on the agenda, among other topics.

The Prime Minister, Vicente Ehate Tomi, chaired the second Interministerial Council of this year, which was held at the Ngolo Palace, in the city of Bata, which is currently the headquarters of the Government, and where most the heads of the ministerial departments of the Republic of Equatorial Guinea have come. 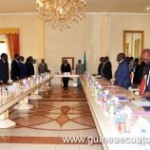 The agenda of this new meeting began with the reading and approval of the minutes of the previous meeting, and continued with the following issues: