Members of the military, students, political parties, and, of course, workers… The National Independence Day Parade brought together thousands of Equatoguineans who saluted the Head of State and the distinguished visitors of this commemoration. Everyone reverberated with the massive show full of colorful surprises: from the first jumps of four parachutists in the country, to an authentic school of Brazilian samba. 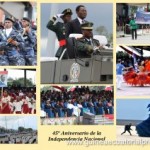 Those that attended and participated in the parade, and those that were able to follow it by television equally enjoyed this historic day for many and different motives. In the first place, because it commemorated the 45th Anniversary of the Independence of Equatorial Guinea; in the second place, because the parade signified the practical inauguration of the new and grandiose Boardwalk of Malabo, which in this way now has an area open to everyone in which to practice sports or simply stroll. But in addition, the parade itself offered spectacular and unrepeatable moments.

The two Vice Presidents also attended, the First, Ignacio Milam Tang and the Second, Nguema Obiang Mangue who, as being responsible for the forces of law and order, had special protagonism in the ceremony.

Once the arrival of all the visitors of honor had finalized, the First Lady also arrived alone, who greeted all the guests. With the presence of the Head of State, the act officially began, which specifically commenced when the President entered a military vehicle and inspected the different law enforcement corps.

Next the parade itself began, in which thousands of persons, from all social levels of the Country, took part.

In the first place came the military parade, in which all the armed forces of the Country participated, beginning with the land, naval and air forces, which appeared, by air and by sea, for the surprise and delight of those present. Along with the different companies, such as the women’s corps or the battalion of honor, the canine brigade, the gendarmerie, the special forces, the motorcyclists or the armored cars, a special came form the jump carried out by four parachutists who belong to the first specialized corps that has recently been training in our Country. The jump clean and successful and raised the applause of those present.

Once the military parade was over, the popular parade began with the presence of all the representatives of Miss World Tourism, who visited Equatorial Guinea on the occasion of the holding of the pageant. Next came the groups of women, the militants of the Democratic Party of Equatorial Guinea (PDGE) and the associations such as the Sons of Obiang Association (ASHO), the workers of all the ministries led in some cases by the ministers, such as Lucas Nguema Esono, Minister of Education and Science and Francisco Pascual Obama, from the Sports department.

The teaching section brought together professors and students of the National University of Equatorial Guinea (UNGE), as well as the Equatorial Guinean Child Support Committee(CANIGE) and of the majority of the school centers of the city.

Subsequently the representatives paraded –leaders and citizens- of the local corporations of the entire Country, beginning with Malabo, with the Mayor Maria Coloma Edjang Bengono at the head, which logically was the most numerous delegation.

The different religious congregations also paraded with a banner in which they expressed their thanks for the freedom of worship existing in the Country, as well as the representatives of the colonies of some African countries, such as Cameroon and Chad.

For the end remained the well-packed parade of the private companies, large and small, of al the sectors who, with the respective banners, also wanted to congratulate the President and his wife and the entire population of Equatorial Guinea on this special day. Among the numerous companies and business associations that paraded, we can mention GEPpetrol, SONAGAS, EGLNG, INPAGE, Asociación del Taxi, Sonavi, GEproyect, Cocsa, Nkoalen, Guinea Limpia, GEmacor, Somagec, China Dalian, Arab Contractor, Setraco, Abayak, Muankaban, Inseso, Empige, Sogea Satom, Horizon, GEtesa, GEcomsa, Sonapesca, GEcotel, Beac, BANGE, Ecobank, Punto Azul, Ceiba and many others.

The Brazilian company ARG added a note of surprise and color, which raised the people from the seats, by converting the Malabo boardwalk into an authentic sambodrome, with the presence of a complete dance school, which covered the route to the frenetic rhythm of the samba.

With the companies, the parade was ended, which lasted more than four hours, and signified that, on the national holiday, the principal protagonists were the citizens themselves of Equatorial Guinea.