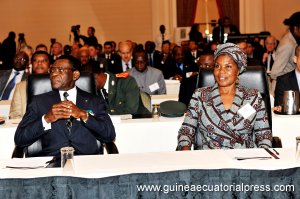 The Head of State of Equatorial Guinea travels to the United States with the aim of participating in the sixty-seventh session of the General Assembly of the United Nations to be held in New York City.

In Malabo International Airport, the Equatorial Guinean presidential couple was seen off by local authorities headed by the First Deputy Prime Minister in charge of Presidential Affairs, Ignacio Milam Tang.