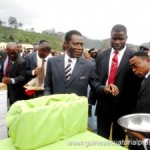 As part of the activities organized on June 5 on the occasion of the 71st anniversary of the birthday of the President of Equatorial Guinea, H.E. Obiang Nguema Mbasogo, the town of Basupu, in the district of Malabo, hosted on Tuesday the ceremony of laying the foundation stones of several works that the Government will undertake in this particular place and in the district of Malabo in general in the near future.