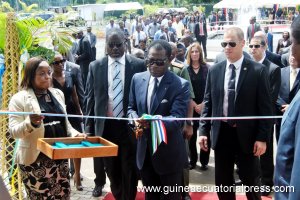 On Friday, November 9, H.E. Obiang Nguema Mbasogo attended the opening ceremony of the new headquarters of the company Marathon and its partners EG LNG and Atlantic Methanol in Malabo II.

The protocol ceremony began with the participation of a company representative, who thanked the President of the Republic at the event, and the construction company for finishing the new headquarters. In his words he also highlighted the Government’s support in training 60 graduates of the National Institute of Hydrocarbons of Equatorial Guinea.

For his part, the Minister of Mines, Industry and Energy, Gabriel Mbaga Obiang Lima, said in his speech that the construction of the corporate headquarters is among the Government’s objectives for 2020. The Minister also called on other companies to follow the example of Marathon, when transferring knowledge and technology to the Equatorial Guineans, in order to fulfill the dream of making Equatorial Guinea an emerging country.

The importance of contributing to the development of Equatorial Guinea

On the other hand, President Obiang Nguema Mbasogo said it is important to achieve development to end poverty, and encouraged all national and foreign economic operators to invest in Equatorial Guinea and establish their headquarters in the country.

-“The company Marathon has proven to be the market leader of investment in our country, and has a positive history since its installation in Equatorial Guinea. Thanks to this investment, Equatorial Guinea is a country on its way to be an emerging country, thanks to the resources of oil and gas that currently provide the financial means so that our country can emerge,” said the Head of State.

The President also recalled that when Marathon came to Equatorial Guinea, the country lacked investment security. He also called for the companies working in the country to not just transfer benefits abroad, because of Equatorial Guinea needs part of them for its development program.

To companies that have not built their headquarters, the Head of State invited them to follow Marathon’s example. “The Malabo II area is a sign of development of Equatorial Guinea,” he said.