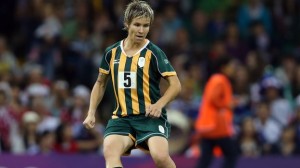 South Africa have the chance to become only the third side ever to win the African Women’s Championship on Sunday.

They will play hosts Equatorial Guinea in Sunday’s final in Malabo.

Banyana Banyana made history on Wednesday by beating Nigeria for the first time, with defender Janine van Wyk (pictured) scoring in a 1-0 win.

The Nigerians have dominated the competition since its inception in 1998, winning six titles, with their only failure coming in 2008.

Equatorial Guinea, who beat Cameroon 2-0 on Wednesday, won the title that year.

Just as in 2008, when their success came on home soil, Equatorial Guinea will once more meet South Africa in the final – who they beat 2-1 four years ago to seal their solitary success.

“Seeing Banyana Banyana beat Nigeria for the first time in our team’s history has left us with an amazing sense of pride and confidence ahead of Sunday’s final,” said South Africa coach Joseph Mkhonza.

“We had to pick ourselves up after the opening match defeat against Equatorial Guinea and have applied ourselves to beat Senegal, the Democratic Republic of Congo and now Nigeria.

“We have some homework to do before Sunday’s final, knowing we will play in front of a large red-clad crowd in what is certain to be a packed Malabo stadium, but we will be ready for the challenge.”

Equatorial Guinea won the first semi-final on Wednesday, thanks to first-half goals from striker Gloria Chinasa and captain Genoveva Anonman, the tournament’s top scorer with 5 goals.

The opening goal was teed up by Jade Boho, whose ineligibility ruled Equatorial Guinea out of the race to qualify for this year’s Olympic Games.

But she then played against Cameroon in an Olympic qualifier last year in a move which ultimately prompted Equatorial Guinea’s disqualification.

Cameroon went on to qualify for this year’s Olympics in London but failed to reach the knock-out round of the competition, with fellow continental entrant South Africa also exiting in the group stage.

So Wednesday’s win for Equatorial Guinea, with Boho playing a leading role in Malabo, would have proved particularly satisfying for the host nation.

Meanwhile, South Africa’s first victory over Nigeria – Africa’s top-ranked side – since the team’s founding in 1993 has convinced their semi-final hero in Bata that an elusive first continental title may be just around the corner.

“I have been in the Banyana Banyana side since 2004 and we have tried for so long to beat the Nigerians but luck has never been on our side, but now we have proved that we can compete and beat the best on the continent,” said Van Wyk.

Prior to Sunday’s final, Cameroon will take on Nigeria in the third-place play-off, which will also be played in the Equatoguinean capital Malabo.