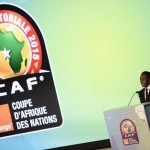 Malabo (Equatorial Guinea) (AFP) – South Africa will have to do it the hard way if they are to add to their sole Africa Cup of Nations title after the draw for the 2015 finals was made in Malabo on Wednesday.

Bafana Bafana — who won the trophy when they hosted it in 1996 but have experienced very little success since — were drawn in Group C along with perennial title contenders Ghana, Senegal and Algeria for the tournament that runs from January 17 to February 8 in Equatorial Guinea.

Two of that trio Ghana and Algeria were in the World Cup finals this year with the latter reaching the second round for the first time in their history and the Desert Foxes took eventual champions Germany to extra-time in their last 16 clash.

It will be quite a baptism of fire for Avram Grant the newly-appointed coach of Ghana — who have flattered to deceive on several occasions at the finals since they were crowned champions for the fourth time in 1982.

Elsewhere hosts Equatorial Guinea — who stepped in when Morocco withdrew because of fears over the Ebola virus spreading there with fans coming from all over Africa — got a relatively kind draw.

They will open the tournament with a game against Congo and will also face Gabon — with whom they co-hosted the 2012 finals — and 2013 beaten finalists Burkina Faso.

The neutral supporter will probably be behind Guinea, who are the only country of the three most seriously affected by Ebola to have qualified, and who have been drawn in Group D.

The Guineans — who will be making their 11th appearance with their best showing reaching the final in 1976 — will have a tough task to reach the knockout stages having drawn both an ageing but still talented Ivory Coast and a revived Cameroon while Mali fill up the places.

Zambia, who won an emotionally charged 2012 final in Libreville, Gabon, will fancy their chances of making a serious bid for the crown after drawing Democratic Republic of Congo, Cape Verde and Tunisia on Group B.

The Zambians secured the continental showpiece just miles from the scene of the plane crash that killed 25 members of the national team in 1993.