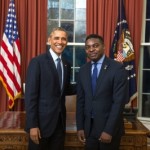 Before being named ambassador to the United States, Ambassador Evuna Andeme was the General Director of Cabinet at the Department of Missions in the Presidency of the Republic in Malabo, where his responsibilities included preparing statements, speeches and correspondence for the president. Previously, he was Director General for Administrative Affairs for the Presidency and a procurement and contracts advisor for Hess Corporation in Equatorial Guinea.

h, Pa., in 2003. While at La Roche, he co-founded the International Forum of African Students.

He was accompanied at the White House ceremony by his wife and five children.

The presentation of credentials is a traditional ceremony that marks the formal beginning of an ambassador’s service in Washington.

The United States and Equatorial Guinea have maintained diplomatic relations since the Equatorial Guinea’sindependence from Spain in 1968. American companies have been instrumental in developing the country’s petroleum sector, which has been the engine of explosive economic growth and social development. Today, Equatorial Guinea boast the highest literacy rate in Africa and the second-highest highest per capita spending on health.