Posted by www.equatorialguineaonline.com – May 22nd, 2013 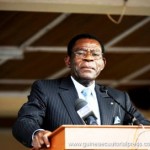 The Equatoguinean Head of State has sent a message of condolence this Tuesday to the President of the United States of America for the death of twenty-four persons, more than two hundred injured and material losses caused by the tornado that flattened Oklahoma City, in the center-south of the county.

“To His Excellency Barak Obama,

We have received with sadness and pain the news of the death of twenty-four persons and various injured, among them several children, provoked by the tornado that flattened Oklahoma City in the center-south of the country, thus causing large material losses.

Dismayed by the sad news, the People of the Republic of Equatorial Guinea and its Government join me to express to Your Excellency and to the North American people our most sincere condolences, anguish and pain, for such a terrible event, while expressing to you our moral support and solidarity.

We ask Your Excellency to extend these sentiments to the affected families.

With my highest consideration.