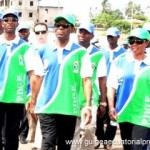 The PDGE’s governing body is composed of a total of 34 members, most of whom attended the work session, which also was attended by the First Lady and Honorary President of the National Organization of Women of the Democratic Party of Equatorial Guinea, Constancia Mangue de Obiang.

According to statements by the Secretary General of the ruling party, Lucas Nguema Esono Mbang, their aim was to analyze what was the development process of the PDGE internal elections, which were held in the country on April 14, and to measure the participation drive of this political party in the senatorial, legislative and municipal electoral confrontations which will be attended by all the legalized political parties in the Republic of Equatorial Guinea