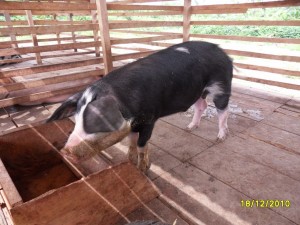 The project was initiated with 20 piglets, and is now up to 38 pigs.  The pigs will be raised to full size within the first 9 months.  The pigs are expected to grow to a size of 150 – 160 kilograms.  Once they reach full size, some will be sold live in the towns of Mongomo and Bata, and some pigs will be slaughtered and frozen for purchase by the local restaurants, hotels and supermarkets.

The pig project is supervised by Christopher Fombu of MAECI, and managed by MAECI Agriculture Manager Albrecht Albers (seen in photo). This section of the farm is maintained by 5 – 7 members of the surrounding villages.

MAECI is expected to expand the pig project in multiple locations in the country including the provinces of Cogo, Mboete, Niefang, Anisoc, Tegete, Oveng, Moyos, Basile and Riaba.  The pig farm project is expected to produce 500 – 700 tons of pork products per year, which will satisfy the current demand within the country, and bring a product into Equatorial Guinea that has been imported on a limited basis to date.

The Mongomo Farm is a 100% efficient (no waste) program, and organic farm that uses almost no chemical fertilizers.    Everything produced on the farm is sold into the market, and by-products, such as pig waste is used for fertilizer. The pigs are fed with the lower grade (not for human consumption) grain that is grown at the farm, as well as coconut husks that are picked up from a neighboring coconut oil factory.  In addition, MAECI picks up waste from a brewery in Bata that is trucked to the farm for consumption by the pig population.

In addition, the timber output from the deforestation process used to clear the land, is cut into planks for construction of new buildings on the property to house the pigs.  The timber that isn’t of a quality or size to cut into planks, will be used in the charcoal project.  The timber is burned in a kiln, and the charcoal is bagged and sold into the market.  The ash that is produced in the burning process is used as fertilizer on the farm.