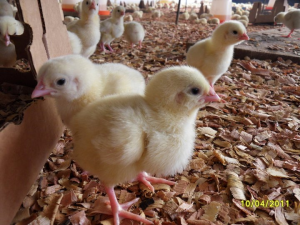 The project was initiated with 1200 chicks that have been raised to full size.  25% (300) of the chickens were sold live in the towns of Mongomo and Bata.  An additional 50% (600) were slaughtered and frozen and purchased by the local restaurants, hotels and supermarkets.  The remaining 25% (300) are egg laying hens that are producing n estimated 1200 eggs per week. 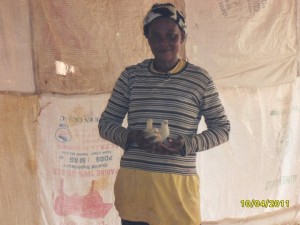 This section of the farm is maintained by 7 – 8 members of the surrounding villages.   The local villagers are being trained to handle the chicken’s care and development.

New Day-old chickens have arrived and they are being given a medication to combat stress. 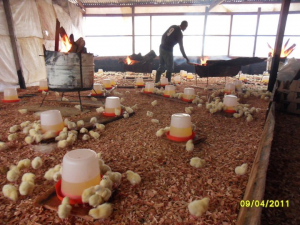 Fires have also been made to keep them warm and the enclosure has been made smaller and protection from the wind has been rigged.

Some of the chickens that are currently being raised have been brought in from Cameroon and once grown to full size, will prepared for the African Union Summit, being hosted by Equatorial Guinea in June.

This project is a part of the Green Revolution that has been supported and invested in by the Government of Equatorial Guinea and soon the country will reach an unprecedented level of self-sufficiency in food production, using revenue from its oil sector, because of a bold approach to revamping driven by Minister of State, Minister of Agriculture and Forests H.E. Teodoro NGUEMA OBIANG MANGUE.

The poultry project is supervised by Christopher Fombu of MAECI, and managed by MAECI Agriculture Manager Albrecht Albers.