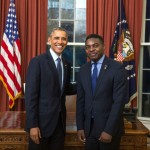 Andeme, 37, presented his credentials to President Obama in February at a White House ceremony marking the beginning of his ambassadorship.

“We at La Roche College are so proud,” college President Candace Introcaso said in a statement. Andeme could not be reached for comment.

Equatorial Guinea is a nation in central Africa of 1.6 million people.

Andeme was part of La Roche’s Pacem in Terris (Peace on Earth) program, which brings students to La Roche from war-torn and developing nations.

He majored in international studies and co-founded the college’s International Forum of African Students, which seeks to bring awareness to African issues.

“Even as a student, his leadership and interpersonal skills were apparent,” Introcaso said. “And our community is humbled knowing that we were the first to welcome the ambassador to the United States.”

Before his ambassadorship, Andeme prepared statements and speeches for the president of Equatorial Guinea. In a statement, he said his time at La Roche was “key to the successes that I am having now.”

He credited the college with “helping to open my mind and giving me the tools to better understand other cultures while not negating my own culture.”