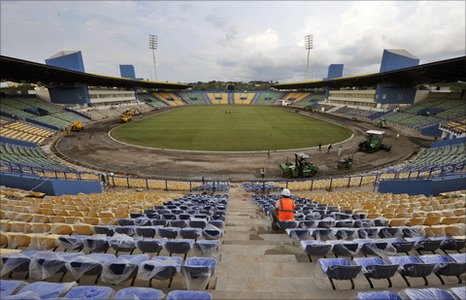 The Stade de Franceville can hold some 25,000 spectators and will stage seven games during the tournament, including Gabon’s final match in Group C

Africa Cup of Nations co-host Gabon opened the Stade de Franceville on Monday evening with a 0-0 friendly draw against Sudan.

The 25,000-seat arena is the last of the tournament’s four venues to open ahead of the finals.

The Nations Cup final will take place in the Gabonese capital Libreville, while matches will also be played in Malabo and Bata in Equatorial Guinea.

The competition begins on Saturday when Equatorial Guinea play Libya in Bata.

Gabon are due to play just one game there, when they take on Tunisia on 31 January in their final Group C clash – with Morocco and Niger the other sides in the pool.

In Monday evening’s clash, the Panthers had chances but Daniel Cousin and Eric Mouloungui both missed good chances.

The misfiring attack echoed the co-hosts’ previous warm-up match in Bitam on 09 January, which also ended goalless against Burkina Faso.

Sudan will contest Group B at the finals, where they will play Angola, Burkina Faso and tournament favourites Ivory Coast.

The 2012 finals will take place between 21 January and 12 February.