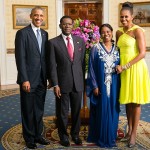 A one-on-one interview with Teodoro Obiang offers insight on how relations between EG and the U.S. have helped transform the country.

What would you say are the determining factors behind the boom Africa is currently enjoying?

Historically, the African continent has been a tricky area in terms of economic growth, due in great part to the fact that most of the countries were colonized and therefore their economies were dependent. With time however, African leaders have come to understand what is necessary in order to improve living conditions. They’ve truly made an effort, collaborating with international organizations, for instance.

Nevertheless, many difficulties remain. For example, Africa is lacking still in human capital that can improve the economic and professional conditions in their countries. Equatorial Guinea, formerly the poorest country on the continent, has worked with both Guineans who’ve returned from the Diaspora and with foreigners, and little by little we’ve improved conditions, thanks also to the exploitation of natural resources like petroleum.

Here in EG, the country keeps 30% of the oil wealth, while the remaining 70% goes to the multinationals, most of which are American. That’s why we must try to put our 30% to the best use possible to instigate changes. What you see in the country are transformations that have been done through programs and planning.

Nevertheless, elsewhere in Africa there is still a strong neo-colonial influence and many other African nations are still under pressure from old colonial powers. I believe that the vision of Africa today is that we must transform it and put an end to its rating as the poorest continent in the world. Unfortunately, there are still countries that cannot evolve independently because they’re still suffering from neo-colonialism.

In what ways do you think EG has changed as a result of its three milestones: the 1968 independence, the 1979 Coup for Freedom, and the beginning of oil production in 1995?

We are working for our country and with support from the people. I’ve been president for a long time because it’s what the voters have wanted. But we’re updating the team. At the state level, we’re incorporating young people into government positions. For example in Parliament and Senate, the majority are university graduates. The majority of the administrative team are also young.

Can you believe that when I became president, there weren’t even five university graduates? Now, we have more than 1,000 professionals. That means we’ve been working hard and that’s why so many professionals and intellectuals are proud of how our country is turning out.

As you explained at February’s Emerging Equatorial Guinea Symposium, the aim of the second phase of the government’s Horizon 2020 is to develop the economy through private initiative and encourage national and foreign investors to invest in Guinea.

I can assure you that the transformation that our country is experiencing now is due to the foreign companies operating here. They take care of building roads, businesses and structures. In this sense, the objective of Horizon 2020 now is to enable us to become self-sufficient and live off our own production and thus avoid economic dependence. Because when a country imports, it runs the risk of not maintaining its capital, and this in turn, weakens the national currency.

And so, we need to develop our industries and see what raw materials we can transform to become more self-sufficient. Take cement, for example. It’s a product in high demand with all the construction taking place, but we can’t build the nation with imported cement. We should have as a base a cement production industry, and that way we could keep more of our capital at home. The same goes for other products that could contribute to our self-sufficiency.

What have you done to mitigate risk for those making large investments?

As for assuring our partners, we’ve established a fund so that when an investor brings his or her money, the government can also collaborate in the business. The reason for the fund is to assure investors that their money is safe, they won’t lose it. Because investors will always be wary, especially with such large sums. The government supports them and gives full guarantees that they will recover all capital invested.

There are, shall we say, “circles of pressure” who do not like EG’s politics and so they present a negative image of the country in the international press. There are many people who rely entirely on what the press says and they don’t have the time to come here and see what’s really happening. So they go on with a distorted image of the country and think it’s a dictatorship. They say there is corruption, human rights violations, no transparency. They call it many things that don’t truly represent the reality of EG today.

All of the changes you see – the new roads and buildings, the excellent hospitals, the universities – they are not the product of cooperation, but rather investments that the government has brought in. All the steps we’re taking and efforts we’re making really should make the world recognize this as a good government.

Considering Guinea is a former Spanish colony, you don’t have as many commercial ties with Spain as one might expect. How should the international community view the long-lasting and positive relations your government holds with some of the most important American companies on a worldwide level?

I’ll tell you one thing: for building better relations between countries, it is the relationship between private entities that really count. Even though the U.S. government wasn’t interested in EG, when we invited private enterprises, oil companies for example, to come, it was they who have strengthened the ties we have with America.

It is the private sector that pressures the government into improving state relations. And that’s why we have such excellent, privileged relations with the U.S. President Obama knows Equatorial Guinea, he knows the benefits of working with us, and that is thanks to the policies of private companies.

We’ve always naturally given Spain preferential treatment in many aspects, but this hasn’t always worked out. In the oil industry, for example, we originally awarded Spanish companies all the concessions, both onshore and offshore. After 10 years of studies and exploration, they announced we didn’t have any oil. I knew that was impossible. So, we mutually called off the agreements. Then an American came, just one man and his boss, Mr. Walter. Within six months they declared that we had petroleum. Although those 10 years with the Spanish were largely a waste of time, on the bright side, our oil was discovered right around the time the price of oil had shot up.

Being the sole Spanish-speaking country in Africa, what are your dealings like with Latin America in terms of economy, culture and diplomacy?

Firstly, many Latin American countries don’t even know we exist. They have no idea there’s a Spanish-speaking country in Africa. Spain’s policy was to neutralize and even hide this colony so nobody ever heard about us. Many find it hard to believe that what is today called Organization of Ibero-American States (OEI) was in fact our brainchild. We held the first meeting here in Bata around 1984. Spain offered to take over and hold the next conference, but that never materialized.

Then, when the OIE was established, Guinea was excluded, up until 2009. However, we did host the Africa-South America (ASA) forum last year. When the representatives from the South American nations came, everyone was surprised. They asked, “How is it possible that in Africa there’s a country where people speak perfect Spanish?” That’s our predicament, we’re orphans. Spain should be the one to introduce to us to the Spanish-speaking world as we share roots. But Spain hasn’t wanted to do so.

We must all open up and recognize each other’s existence and possibilities, and we’re going to do this without Spain’s help.

Now we’ve opened a second university called Universidad Afroamericana. We’re going to give Latin students scholarships to come and study here. A degree isn’t just about scholastic lessons; it’s also about culture. When you go to another country you learn about another culture. When the students from Latin America come, many will make friends with Guineans and that will help us form a close-knit family.