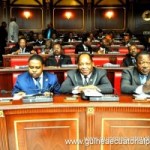 Vicente Ehate Tomi, Prime Minister of the Government for Administrative Coordination, was confirmed in his position, according to Decree number 119.

Clemente Engonga Nguema Onguene continues as First Deputy Prime Minister for the Political Sector, Democracy and Minister of Internal Affairs and Local Corporations, Lucas Nguema Esono, Secretary General of the Democratic Party of Equatorial Guinea (PDGE), goes on to be the Second Deputy Prime Minister for Social Affairs and Minister of Education and Science, according to decrees number 120 and 121.

In the upcoming days, the swearing in of offices will take place before the President of the Republic, H.E. Obiang Nguema Mbasogo.