The Second Vice President of Equatorial Guinea granted an exclusive interview to Asonga TV in which he recounts his struggle to defeat the attacks of Western countries that accuse him without finding charges or evidence: “Everything is a game of the enemies of Equatorial Guinea to destabilize our country,” declared Nguema Obiang Mangue, accusing France and the United States of working together to diminish him. “We African leaders will fight against those who have plundered us for years,” also said the Vice President. The full interview can be seen at  http://www.youtube.com/watch?v=P6w-6xPYCMw 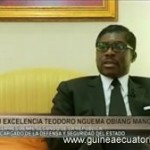