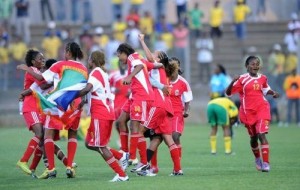 Equatorial Guinea Press: (Oct. 30, 2012) – The Women’s Nzalang won by one goal to nil the  difficult South African team in the opening match of the Women’s CAN  2012, which was held at the new Malabo Stadium. On the occasion of the  opening match, the Vice President Teodoro Nguema Obiang also offered a  bonus of 500 million CFA francs -equivalent to a million dollars- in the event that the Nzalang was victorious, and ten million CFA francs  (about $20,000) for each goal scored by the players of the national  team.
The national team started playing with a team made up by Miriam, S.  Adriana, Nike, Carolina, Ana Cristina, Mariana, Jade, Dorin, Anonman,  Camila and Chinasa. The first few minutes were used to make contact and  the two teams showed they are among the favorites to clinch this CAN  2012.

The match began with the kick-off by the First Lady of the Nation,  Contancia Mangue de Obiang, who is the Women’s Nzalang number one fan  and who wore the team jersey.

The match was played with many difficulties, because the field was in  very poor condition due to the heavy rainfall that took place before the game, but the national team started to dominate the game and at 20  minutes, a great play by Equatorial Guinean Jade resulted in a shot that almost became the first goal.

The goal was imminent, and several Equatorial Guinean plays put the  South African goalkeeper, Dlamini, in serious danger, until a great play by Equatorial Guinea ended with a spectacular header by Chinasa, which  would subsequently be the victory goal.

A few minutes later, a new play by Jade and a shot by Chinasa were  stopped by the goalkeeper. But then Anonman launched a hard shot that  grazed the South African goalpost. Equatorial Guinea clearly dominated  the match and had South Africa at their mercy.

The first half ended with a shot against the crossbar by Jade, one of  the best players of the match, along with the goalscorer Chinasa. The  second half was a continuation of what happened in the first, with the  Nzalang dominating the match and a defense that prevented all attack  attempts of a desperate South Africa.

At that time, the player Bruna entered the field to replace the injured Dorin, and Adriana Tiga substituted Jade. The match ended with the  result of 1 to 0, with the audience going crazy and with the Nzalang  presenting its strong bid to win the Women’s CAN. The technical approach was excellent, the team was outstanding and the delivery of all the  players was commendable.

On the occasion of the opening match, the Vice President Teodoro Nguema Obiang also offered a bonus of 500 million CFA francs -equivalent to a  million dollars- in the event that the whole Nzalang proves victorious,  and ten million CFA francs (about $20,000) for each goal scored by the  national players.