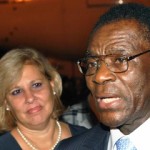 HAVANA, Cuba,  The President of Equatorial Guinea Teodoro Obiang Nguema Mbasogo expressed his desire to move towards an increase in all kinds of bonds between his country and Cuba.

At the end of his three-day stay in Havana, the African leader, who was received on Monday by Cuban President Raúl Castro, praised the Cuban solidarity and wished more rapprochements with Cuba.

We are two sister nations with similar roots and traditions and a history of excellent relations, so they have to tend to increase, said Mbasogo in the Jose Marti International Airport, minutes before his departure, after completing his official visit.

Accompanied by Ana Teresita Gonzalez, Deputy Foreign Minister, Nguema Mbasogo recalled to reporters that the Caribbean nation has offered its assistance in the training of young people from his country in various specialties.

The small African state has just over one million inhabitants, and it maintains fraternal relations with Cuba dating from December 27, 1972.

It has maintained a firm position condemning the economic, commercial and financial blockade that the United States has maintained against Havana for more than five decades.