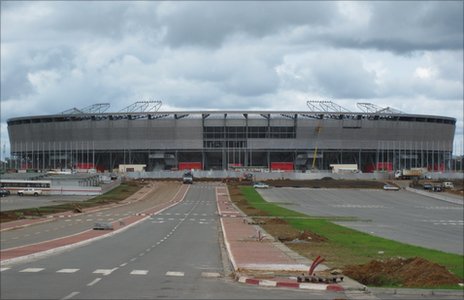 The stadium in Bata will host the opening ceremony and match of the Nations Cup, as well as seven other games – including a semi-final on 8 February

Equatorial Guinea officially opened their new Africa Cup of Nations stadium in Bata on Friday when taking on South Africa in a friendly.

The 35,700-seater stadium will host the opening game of the Nations Cup when the co-hosts meet Libya on 21 January.

The game ended in a 0-0 draw despite the fact that South Africa were reduced to ten men in the second half.

Until the 15,000-seater arena in the capital Malabo was built eight years ago, the country’s football fans watched games in conditions that were far from ideal.

“In 2003, we had a very small pitch, with a very small capacity for people and tiny stands – and it was a bit dangerous for some spectators,” midfielder Juvenal Ebjogo told BBC Sport.

“But today, we have a major new stadium. The country has evolved greatly and we are developing more quickly than the rest of Africa.

“I can only approve of this because when you look at the past, we are proud to be able to enjoy today all that we have.”

Ebjogo, who plays for Sabadell in the Spanish second division, was one of a clutch of overseas-based footballers who arrived in Equatorial Guinea earlier this week to a heroes’ reception.

The country’s official news agency reports that captain Rodolfo Bodipo received flowers upon disembarkation from Spain, where he is on Deportivo la Coruna’s books.

Despite the fact that he will have had just six days with the players before having to name his 23-man squad for the tournament, Juvenal has been impressed by the Brazilian so far.

“I think the new coach has extensive experience,” Juvenal explained. “I think that he needed more days of training to know (us better) but he will be a good coach for us in future – I have hope.”

After meeting Libya on 21 January, Equatorial Guinea – who will be contesting the Nations Cup for the first time in their history – take on Senegal and Zambia in Group A.

Gabon will stage the Nations Cup final on 12 February in Libreville.