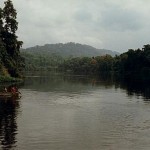 (Business in Cameroon) – No later than August 30th, Cameroon will submit to the Economic Community of Central African States (ECCAS), its take on the Joint Technical Committee (CTM) in charge of monitoring the construction of the bridge over the Ntem River, located on the Kribi-Campo(Cameroon)-Bata(Equatorial Guinea) corridor.

It emerged from a workshop from 19 to 21 August in Ebolowa, the State-run daily, Cameroon Tribune said last Monday.

Contained in the Memorandum of Understanding signed on 23 June 2013 between the Governments of Cameroon and Equatorial Guinea, the workshop was to draw up rules of procedure.  Participants were senior officials from the Ministries of Economy, (Minepat) Public Works (Mintp) External Relations (Minrex) Transport (Mint) and Finance (Minfi).

Explicitly described in the joint statement after the working and friendship visit of Teodoro Obiang Nguema Mbasogo, President of Equatorial Guinea in Yaoundé on November 30, 2012, the workshop was timely.

It is clear that Cameroon and Equatorial Guinea are strongly committed to build a bridge over the Ntem and hence a tarred road between Kribi and Bata, via Campo.