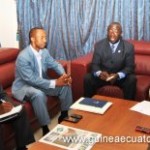 Gregorio Boho Camo began by congratulating Domingo Mituy both for his election at the FEGUIFUT and for the victory of the Nzalang in the friendly match against Benin. The president of the entity also conveyed the decision of the Chamber of Commerce of Thailand to support the national football federation.

Meanwhile, Domingo Mituy thanked him for obtaining the support from Thailand and said that the FEGUIFUT is ready to accept their offer. He also said the Nzalang could hold their concentrations in the Asian country, and requested that the Federation be a member of the Chamber of Commerce.

Subsequently, Boho Camo received the President of the Technical Committee on Industry, Alejandro Envoro Ovono, who provided the final minutes of the recent meeting on industrialization.