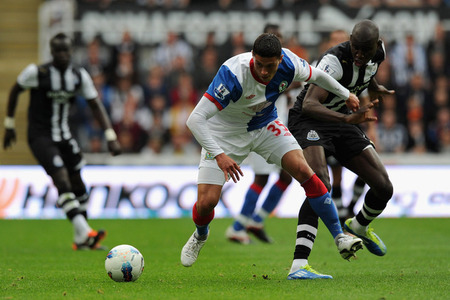 NEWCASTLE UPON TYNE, ENGLAND – SEPTEMBER 24: Jason Lowe of Blackburn is tackled by Demba Ba of Newcastle during the Barclays Premier League match between Newcastle United and Blackburn Rovers at St James’ Park on September 24, 2011 in Newcastle upon Tyne, England. (Photo by Gareth Copley/Getty Images)

I originally intended to make an update when the Africa Cup of Nations draw happened, but I forgot…and forgot…and forgot.  The draw took place in Equatorial Guinea, one of the two host nations, on October 29.  This is your incredibly timely update on how the draw will affect Newcastle.

As a reminder, Demba Ba (Senegal) and Cheik Tiote (Côte d’Ivoire) are NUFC’s two participants in this event, and each will miss a minimum of two games: Fulham away on January 21 and Blackburn Rovers away on February 1.  Group play will be ongoing at the time.

Côte d’Ivoire is the highest ranked nation in the competition at #19, according to FIFA, so they would have been favorites to advance from group play in any case.  It’s especially so here, as they received a very favorable draw, making advancement even more likely.  They were drawn into Group B with Sudan (one of the last teams to qualify and the nation with the worst rank outside of hosts Equatorial Guinea), Angola, and Burkina Faso.  The major drama in this group will likely be which of Angola and Burkina Faso places second, though Angola, who have been to the quarterfinals each of the last two tournaments, will be the favorite there.

Senegal, ranked 45th in the world, had an even better draw, as they were placed into Group A with hosts Equatorial Guinea.  Libya and Zambia were the other two nations added to that group, and either one of them will be happy to advance to the quarterfinals.

If both Senegal and Côte d’Ivoire were to both win their groups as expected, they would be on track to face each other in the Championship game on February 12, which would be the worst case scenario for Newcastle.  In the unlikely event that either are eliminated in the group stage, Tiote and/or Ba would most likely be available for a home tie with Aston Villa on February 4.  Since that will likely not happen, the Toon Army will be rooting for both teams to be eliminated in the quarterfinals (February 4) or semifinals (February 8) so that they can be back in England to face Tottenham Hotspur in London on the 11th.

One side benefit to the players leaving at the end of January (especially Tiote) is that it effectively moves the transfer deadline for them up by several days, as the international coaches will likely not be very tolerant of their players leaving to go have physicals and sign contracts in the middle of their tournament.  (It’s a lot harder to commission a helicopter ride from the Equator to England at the last minute as well.)

Cheik Tiote and Demba Ba are important players for Newcastle, as we saw on Saturday.  Losing them for a minimum of two games (and likely more) will hurt, but luckily the fixture list is not too unkind (Imagine if this tournament coincided with the #StretchofDoom).  The main thing to root for is that neither makes the final.  Spurs away is a tough enough proposition, even when two of the team’s best players are in the squad, never mind when they’re on a different continent.