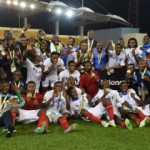 The 2014 Africa Cup of Nations (AFCON) is quickly winding down (the final is Sunday at 2 pm ET) as DR Congo and Equatorial Guinea faced off in Saturday’s third-place game after falling at the hands of Ivory Coast and Ghana, respectively, in this week’s semifinals.

DR Congo defender Gabriel Zakuani called for his team to pull out of the third-place game earlier in the week following the awful scenes of fan violence during Thursday’s second semifinal, but the game went ahead anyway. Less than 4,000 fans were on hand for Saturday’s consolation game, leaving much of the 15,000-seat Nuevo Estadio de Malabo empty.

There were no issues of poor behavior on Saturday as the game was played without incident.

DR Congo, two-time AFCON winners (1968, 1974), and Equatorial Guinea, who this year reached the semifinals for the first time ever, played to a 0-0 draw through 90 minutes and needed penalty kicks to decide this year’s second runners-up.