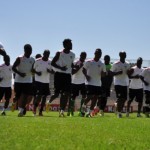 The Hawks of Togo will play a friendly game against Equatorial Guinea June 4 in Malabo.

The announcement has been made by the Togo football federation through its Secretary General, Yvette Klussey. The Hawks clash with Cameroon June 9 in their qualifiers for the FIFA World Cup, Brazil 2014. The Indomitable Lions on their part will this weekend be warming up against Ukraine at the Olympic stadium in Kiev