The United States, which faced an uncharacteristic struggle to qualify for soccer’s 2011 Women’s World Cup, was drawn into a first-round group with North Korea, Colombia and Sweden in Frankfurt, Germany on Monday.

The tournament, which will be played in nine cities around Germany, will open on June 26 in Berlin with the hosts playing Canada. The United States begins play in Dresden, in the eastern part of the country, against North Korea on June 28, then travels west to play Colombia in Sinsheim on July 2. It finally heads north to face Sweden in Wolfsburg on July 6.The United States was the final qualifier in the 16-team field.

The teams in the Women’s World Cup were drawn into four groups of four teams each, with the top two finishers in each group advancing to the first knockout stage, the quarterfinals, which begin July 9 and 10. The semifinals will be played in Frankfurt and Mönchengladbach on July 13, with the final in Frankfurt on July 17.

The American team was all but guaranteed a difficult draft. It was one of four seeded nations — joining host Germany, Japan and Brazil — and was placed in Group C before the formal draft. Japan, Brazil and the United States earned seeds as the top-rated teams from their confederations; and Germany as the host (though Germany is also the two-time defending champion). According to the rules of the draw, neither Mexico nor Canada, the two other countries from the Concacaf region, could be in the same first-round group with the United States. That meant drawing either Australia or North Korea as one opponent. While the nations in Pot 3 — Colombia, Equatorial Guinea (both first-time qualifiers), Nigeria and New Zealand — appear on paper to be less of a challenge, the American team knew it would also be drawn against a difficult opponent from Europe from among England, France, Norway and Sweden. 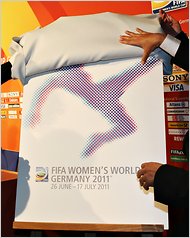 Alex Grimm/Getty Images The official poster of the 2011 Womens’ World Cup was unveiled in Frankfurt, Germany, on Monday.

The United States, which is the defending Olympic champion but has not won the World Cup since hosting in 1999, was forced into a home-and-home playoff against Italy to reach the final draw. The American team scored consecutive 1-0 wins against the Italian team, Nov. 20 in Padua and last Saturday in suburban Chicago. The Americans needed the playoff after losing to Mexico, 2-1, in the semifinals of regional qualifying. Canada is the other Concacaf nation that qualified directly for the finals.

“Since FIFA put in the U-17 and U-20 Women’s World Cup, so many things have happened in different countries,” Sundhage said. “Going back to the qualification in Mexico, we’re playing against Costa Rica, Guatemala and they’re technical. That’s the important thing about the future of the women’s game, it’s technical and that’s something this country needs, technical players. They need to touch the ball quit a bit when they’re young, very young, and spend time with the ball. I would say the world’s catching up and on top of rank No. 1, it’s hard to stay there, but we’re doing what we can.”

The United States was represented at the draw by Sundhage, who will coach a first-round game against her native Sweden, and defender Ali Krieger, who plays for the German club F.F.C. Frankfurt in the women’s Bundesliga.