The Sipopo Conference Center hosted last Saturday, August 10, the Third Summit of Heads of State of the Gulf of Guinea Commission (GGC), a meeting which was chaired by the President of Equatorial Guinea and the current President of the Commission, Jose Eduardo dos Santos. 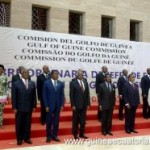 It was also attended by the First Ladies of Equatorial Guinea, Constancia Mangue de Obiang, and that of the Republic of Congo, Antoinette Sassou Nguesso, the Vice Presidents Ignacio Milam Tang and Teodoro Nguema Obiang Mangue, members of the Government headed by the Prime Minister, Vicente Ehate Tomi, personalities of the diplomatic body  and other civilian and military authorities.

The opening began with a speech by the Mayor of Malabo, Maria Coloma Edjang Bengono, who welcomed all the attendees and wished them a happy stay in Equatorial Guinea. Then spoke Jose Eduardo dos Santos, current President of the conference, who thanked the President, the people and the authorities of Equatorial Guinea for the warm welcome they have received.

Eduardo dos Santos said that “the Gulf of Guinea plays an important role in the planet’s energy security. There are still conflicts in some States in the region and there is an increase in crime and piracy. Terrorist threats, money laundering and drug trafficking are dangers for the peace and security of the Gulf countries.” He also called on Member States for their contribution and accountability, since the problems at sea can have consequences on land.

Finally, he said farewell with words of remembrance for the disappeared President Ali Bongo, and congratulating H.E. Obiang Nguema Mbasogo for the profound transformations in Equatorial Guinea.

Next spoke Miguel Trovoada, Executive Secretary of the GGC, who made ​​reference to the environmental problems caused by oil exploitation, which deserve priority attention of the commission. He also referred to maritime security, essential for trade between Africa and South America. Highlighting the importance of south-south cooperation, he said that “the commission should not lose sight of the reality of South America.”​​

After the speeches there was a presentation of the reports of the various bodies, and the session ended with the final statement that was read by the Minister of State for the Presidency for Regional Integration, Baltasar Engonga Edjo.

In the Report of Activities of the Executive Secretariat, it was promised to monitor the decisions of the Yaounde Summit, which was held on June 25, 2013, particularly on the implementation of the Interregional Center for the Coordination of Maritime Security in the Gulf of Guinea. In the conclusions, he recognized that, although the results were not up to expectations, the visibility achieved by the CGG is a step forward in promoting and defending the interests of the States and the people of the Gulf of Guinea.

The current Presidency of Angola, in its report, referred to the spirit of consensus of the organization since the beginning, and the need to strengthen the commission, through the integration of other coastal States of the subregion.

He also stressed that the budget is still one of the most important problems, since some Member States have difficulties in mobilizing their contributions, which generated operating difficulties in the Executive Secretariat. Finally, he referred to the various threats that plague the subregion and that require functional improvement of the Executive Secretariat, so it can become an actor able to define and defend the interests in the international political scene.

They also appointed H.E. Obiang Nguema Mbasogo as President of the GGC; they deemed the need to harmonize the laws of each State in maritime safety, reminded the Member States of the obligation to pay contributions and delays, and warmly welcomed the accession to the institution in Ghana, Ivory Coast and Liberia.