Reigning world champions Spain will face Equatorial Guinea in a friendly in
Malabo on 16 November. 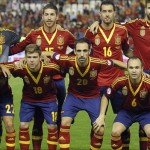 Vicente del Bosque’s side are already scheduled to play South Africa in Johannesburg on 19 November.

The match will take place at FNB stadium – the same venue where Spain secured their first ever World Cup in 2010.

Del Bosque will name his squad for both matches on Thursday.

Atletico Madrid striker Diego Costa is expected to receive his first call-up after declaring his intention to represent Spain rather than Brazil, the country of his birth.