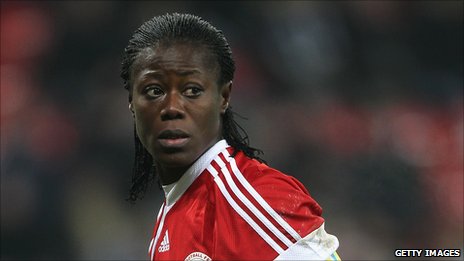 Nigeria captain Precious Dede is confident her side can make an impact this time Nigeria and Equatorial Guinea are preparing to represent Africa at the Women’s World Cup, which kicks-off in Germany on Sunday.

Nigeria have been to every edition of the female global showpiece, but Equatorial Guinea are making their debut at this level.

Nigeria face the hosts and defending champions Germany, plus Canada and France in Group A.

Falcons to fly?Despite playing at every single World Cup, since the tournament’s inception in 1991, the Super Falcons have only managed to get past the groups stages once – in the USA in 1999.

This time around Nigeria’s squad has a blend of experienced campaigners, even with the surprise omission of Cynthia Uwak, and talented youngsters.

Veteran Perpetua Nkwocha, the top scorer at the African Women’s Championship (AWC) last year in South Africa, will play alongside Ebere Orji, who helped Nigeria reach the final of the 2010 U20 Women’s World Cup.

The Super Falcons have been training in Austria and recently drew 2-2 with Switzerland and are in confident mood ahead of the tournament.

“I am counting on the coaches to bring out the best in us, I am sure we will be ready to take on the world,” captain and keeper Precious Dede said.

Nigeria play the first match of the tournament when they take on France on Sunday afternoon.

Under the radar?World Cup debutants Equatorial Guinea have kept their preparations under wraps, hoping to be the tournament’s surprise package.

Two of their stars from the AWC, Bilguissa and Salimata Simpore, who were at the centre of claims about their sex at the tournament in South Africa, have been left out of the squad. 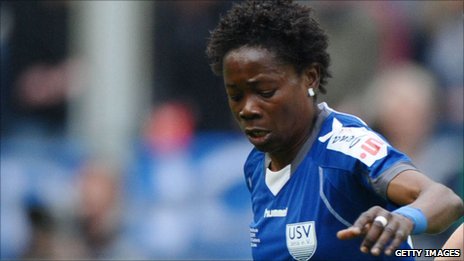 Equatorial Guinea captain Genoveva Anonma is ready for the Women’s World Cup in Germany, where she plays her club footballTheir omission comes despite Equatorial Guinea rejecting claims by Nigeria and other countries that the sisters are male.

Genoveva Anonma, who also caught up in that row, has been included in the squad and will captain the side.

“I’m excited, I’m a bit nervous because I’ve never played in a World Cup,” Anonma, who plays her club football in Germany, said.

“It’s very emotional because most players want to be in the position we’re in right now.”

“I came here improve my game a bit, because playing in Africa isn’t the same as playing in Europe,” she explained.

She seems to have adapted well to the game in Germany, because she was top scorer for USV Jena and this month secured a transfer to top Bundesliga side Turbine Postdam.

Anonma says the team will be especially keen to take points from Brazil in their final group match, because a number fo the squad play in that country.

“That’s an advantage for us, having lots of players in Brazil – having them play for us can only help” she said.