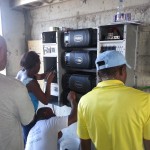 Solar Energy International(SEI) carried out two PV Solar training programs on  Annobon Island. The first one during June and the second one in October 2014. These trainings, performed in spanish, were hired and funded by MAECI SOLAR, a division of Management and Economic Consulting Inc. The company is currently building a 5MW battery based PV plant to supply the island and it’s inhabitants with much needed electrical power for local hospitals, schools, airport, public services, infrastructure and many additional areas that will improve local residents’ quality of life and income opportunities.

Per MAECI SOLAR’s request, both trainings included in person theory and hands on training on both grid tied and stand alone battery based PV solar systems. The  program used for  the practical portion of the trainings solar equipment available on the island in addition to components and specialized instruments brought from the  United States by SEI. 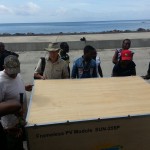 The people of Annobon were offered comprehensive hands on and online trainings in how to design, install and maintain solar photovoltaic systems and other renewable  energy technologies. The goal of the program was to train technicians, engineers, project managers, and individuals from both public and private sectors interested in acquiring useful and practical knowledge in renewable energies. The program also aims to facilitate the expansion of sustainable sources of energy and to create greater access to electricity for underserved communities in different areas around the world.

One program offered included an overview of the three basic PV system applications, primarily focusing on grid; direct systems. The goal of the course is to create a fundamental understanding of the core concept necessary to work with all PV systems, including: system components, site analysis, PV module criteria, mounting solutions, safety, and commissioning. The course also covered the basics of sizing a residential grid; direct system, wire sizing, over current protection, and grounding. This 5 day workshop included hands on labs to understand solar site analysis by using a solar pathfinder, shading analysis, module orientation, solar radiation measurements, among other exercises.

To support the formation of highly qualified PV technical personnel, the companies involved  are very interested in continuing to provide PV Solar training in  Equatorial Guinea due to the great solar development potential in the country.