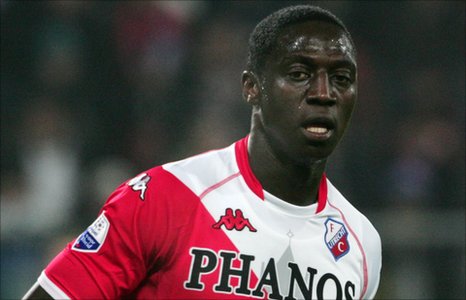 Jacob Mulenga damaged his knee while playing for FC Utrecht in November Zambia striker Jacob Mulenga has an unusual way of looking at next month’s African Cup of Nations finals.

The 27-year-old has been ruled out of the tournament after damaging his knee while playing for Utrecht in a Dutch league match against Ajax in November.

It means he will only follow a tournament being co-hosted by Gabon and Equatorial Guinea on television.

“It’s hard not to be playing but I think it’s also very exciting watching the guys play,” he told BBC Sport.

Mulenga’s doctors say he will be unable to return to football for at least six months.

Though he admits the pain of not contesting the competition, the Zambian claims that he is happy to watch his compatriots on television.

“I know them very well and know what they are capable of, so it’s not such a bad thing,” says a man likely to have started most of Zambia’s games in Equatorial Guinea.

All but three of Zambia’s squad are currently in South Africa where coach Herve Renard took his squad through its first session of intensive training on Wednesday.

“The team is in high spirits and concentrating on their work,” says FA spokesman Erick Mwanza.

The southern Africans will stay in South Africa until 17 January, when they are set to depart for Equatorial Guinea.

The Chipolopolo will face Senegal, Libya and Equatorial Guinea – who are co-hosting the tournament alongside Gabon – in Group A next month.

Many pundits are pitting Senegal as group favourites but Mulenga does not want to discount his team’s chances before the tournament starts.

“I always say football is a 50/50 game, so our chances are like everyone’s chances,” he says.

“We are not going to make up the numbers otherwise there would be no reason to be there – Zambia definitely has a more than fair chance against everyone in our group.

“Football is played over 90 minutes – and it’s the strongest and smartest men that win it.”

Mulenga does, however, emphasise the importance of experience.

The Chipolopolo campaign will be anchored around most of the players who qualified the team to the quarter-finals of the 2010 edition in Angola.

“The team has a lot of experience,” Mulenga argues.

Zambia have contested all but one of the last 11 Nations Cup tournaments, reaching the quarter-finals two years ago.