While pundits whine about having to figure out where Qatar is and worry about overly long flights from one Russian World Cup match to another, players for the South African women’s national team have come forward with charges that their coach, Augustine Makalakalane, sexually harassed the women and was openly, aggressively homophobic, declaring (for example) he only wanted “straight ladies on the team.” Two former players charge that they were dropped from the team when they refused their coach’s advances. They describe abusive behavior and a lack of respect for women and for the women’s game. 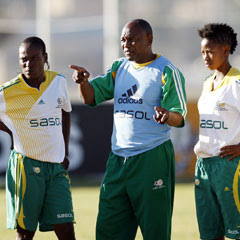 Makalakalane (pictured here, center) is already in trouble with the South African Football Association, as his team failed to qualify for the 2011 World Cup when they lost to Equatorial Guinea and came in 3rd in the Africa Women’s Championship this year. Makalakalane refused to call up any of the South African players living and playing abroad (Equitorian Guinea, on the other hand, is stacked with international players who were rushed through eligibility procedures), thereby cheating the team of the wisdom those more experienced players might have brought to the squad.

Players describe him as having a “stinking attitude” towards women. Banyana player Nthabiseng “Moemish” Matshaba alleges that the coach made direct advances toward her, and dropped her from the team for not sleeping with him – just before the African Women’s Championship. According to Sameer Naik’s story for IOL Sport, Matshaba

said she had been ‘heart-broken’ after she was left out of the squad, but will refuse to play under Makalakalane. Naik, “More allegations against Makalakalane,” 11/27/2010