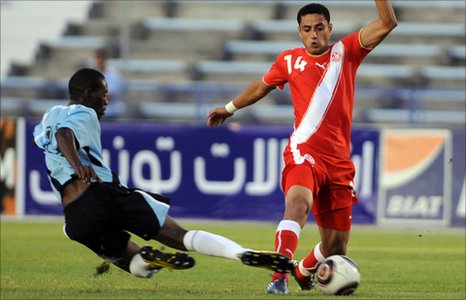 Botswana are on the brink of qualifying for the Africa Cup of Nations for the very first time – and their star player can hardly believe it.

Dipsy Selolwane is their record goalscorer and most capped player but can scarcely believe the transformation in a side who have never before come close to making it to the Nations Cup.

Following two astonishing victories over Tunisia, the Zebras need just one win from their remaining three qualifying games to make certain of their place in the 2012 finals in Equatorial Guinea and Gabon.

“I’ve been in the team for almost 12 years now and we started the campaign thinking it would just be another one where we would crash out early like we normally do,” Selolwane told BBC Sport.

“We went to Tunisia in the opening match hoping to get a point playing on the counter-attack and managed to score an early goal before holding on for the rest of the game.

“I think the players got a lot of confidence from that result, but when we managed to beat Chad, draw with Malawi and beat Togo to move to 10 points, we knew we had a real chance of making it.”

Another 1-0 victory in the return match against Tunisia in Gaborone on 17 November has now put them within touching distance of making history.

Having only achieved their first competitive win in 2002, it’s been a remarkable rise for a country that still boasts just seven professional players – all based in neighbouring South Africa – with the rest drawn from Botswana’s amateur league.

“Most of the players in our league are just getting by and hoping they will be scouted to come to South Africa,” said Selolwane, who plays here with SuperSport United.

“If we qualify, it will open the window for everyone to come and shop for players.”

Selolwane highlighted the performances of 21-year-old central midfielder Ofentse Nato from Gaborone United and veteran goalkeeper and captain Modiri Madumo, who has led Botswana from 116th to 67th in the Fifa rankings since the start of their qualifying campaign in June.

Striker Jerome Ramatlhkwane is also a key man for the Zebras.

He is currently the leading scorer in the whole of African qualification with four goals in five matches but his club career is in limbo as he waits for a dispute between Cape Town-based PSL sides Santos and Vasco da Gama to be resolved.

“It’s a real shame because he is a very talented player – to score four goals in the qualifiers against good teams shows Jerome has great ability,” admitted Selolwane.

The 32-year-old Selolwane knows that history is within the grasp of the Zebras.

“It would take a lot to go wrong for us not to qualify now but I don’t want to jinx it,” he said.

“To make it through would be amazing for the nation – hopefully then football will be seen as more than just a recreational activity in Botswana.”